Can I Use Duct Tape to Fix My Ventilation System? 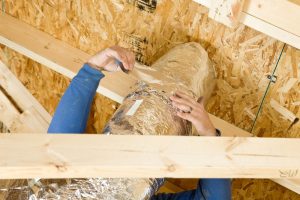 Yes, duct tape can resolve just about any fix-it situation … temporarily. That’s right, duct tape is not actually appropriate to use on ductwork breaches. Who would have thought?

One of the biggest “energy thieves” in the standard home, and cause for AC repair in Round Rock, is from leaks in the air ducts, which is not likely something you think about a whole lot. But proper duct sealing from HVAC experts can stop your AC system form losing as much as 30% of the air that moves throughout the duct system.

The Problem With Duct Breaches

Think about what ductwork damage translates to: you’re paying to cool the air in your home through the summer, but thirty percent of what you’re paying for may be wasted in attics and crawlspaces where air ducts typically reside. With our professional duct repair and sealing services, however, you’ll see significant savings on your cooling bills.

But Really, No Duct Tape?

If duct tape is no good, why is it even called duct tape to begin with? The theory is that this consumer-grade tape, made available in most stores during the time of the First World War and consisting of a clothback, was actually called duck tape.

It’s speculated that this is because the tape is backed with duck cloth, or because the tape’s water-resistant properties reminded people of how water washed off a duck’s oiled back. Around the 1950s, however, duck was somehow changed to duct, probably because of the mistaken assumption that would work on air ducts as a way to repair and seal them.

Superficially, we can see this as a solution, albeit a temporary one. The problem is that duct tape reacts poorly to heat and temperature fluctuations, which is understandably pretty common in your ductwork! The adhesive of duct tape becomes brittle, and the tape fails. You can maybe expect it to last a month or two.

When you schedule professional duct sealing, your HVAC technician will use specialized equipment, such as resin-based mastic sealant and metallic tapes to ensure that the air ducts are made airtight. However, it takes more than just professional-grade sealing equipment to effectively do the job. HVAC technicians must locate where the leaks are occurring and access them, which is something an amateur cannot effectively manage.

If you suspect that you are in need of professional duct sealing, be sure to reach out to our pros. You will know something is wrong if you hear hissing or banging coming from the ducts. It’s normal to hear a little noise right when your HVAC system starts up and shuts down because of temperature fluctuations, but it should not persist.

“We are here to make your life a breeze”